Vembanad Lake is called the Vembanad Kayal or the Vembanad Kol. On the national level it has been recognized as the longest and even to some extent one of the largest lakes of the country. In fact, this expansive lake spans several districts of Kerala. Consequently, it is no great wonder that it is named differently in each place. 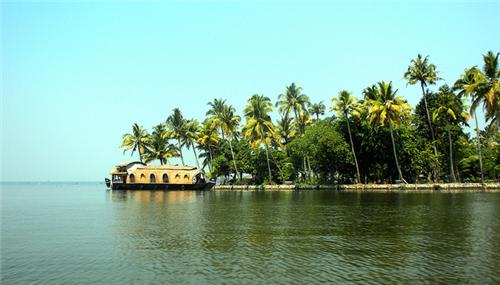 Thus, in Kuttanad it is referred to as the Punnamada Lake. The Vembanad backwaters which are also a part of this lake form the wetlands reserved for conservation under the National Wetlands Conservation Programme of the Government of India. This was a step taken to counter the adverse impact of sewage effluents and pollutants being released and contaminating the wetlands.

Interestingly enough the Kochi port has been formed at the Arabian sea outlet of the Kochi lake. It forms a northerly extension of the Vembanad Lake. On the east coast is located the world renowned Kumarakom Bird Sanctuary which is home to numerous species of birds from far away destinations.

The conservation processes in this part of the natural water ways were initiated after studies showed that some of the areas on the Vembanad backwaters were registering very high level of pollution. Bordered perimeter on all sides by the Kottayam, Enakellum and Alappuzha districts Vembanad lies at sea level. There are three islands situated within the lake. They are named Pallippuram, Pathiramanal and Perumbalam. At its widest point, the lake is around fourteen kilometers wide.

Thus, the Vembanad Lake and the Vembanad Kol wetlands are contingent. Another very unique aspect of the lake is the fact that ten rivers flow into it. Among rivers that are flowing into the lake and they are namely, the Achenkoil, the Periyar, the Manimala, the Pamba, the Muvathepuzha and the Meenachil which are the main rivers of Kerala. The remaining four are from elsewhere. In 2002, the Vembanad wetland system was included in the internationally significant wetlands of the world.

The Vembanad backwaters form one of the three Ramsar sites of Kerala which have a strategic significance for ecological maintenance of the land. The project had focused on the reclamation of the water body as this was the chosen haven for international migratory birds. More than twenty thousand migratory birds wing their way to the have made this a favoured location. Another unique feature is the large quantity of shrimp thriving in this water body. In fact, they are a major economic resource for the population. Quite a large member entreaties and lagoons make an intricate web inter weaving the various connectivities between different areas and collectively forming what has come to be called the Vembanad wetlands. This wetland system stretches a vast territory of about two hundred kilometers in the North-South direction and for about thirty kilometers in the East-West direction.

How to Reach Vambanad Lake

Getting to Vembanad is easily done by air, railways and road routes. By air the nearest airport is the international airport located in Cochin or Kochi. It is about sixty kilometers from the main Vembanad destination.

By the rail route Vembanad can be reached through the nearest railway terminus at Kottayam. The Kottayam railway station is just thirteen kilometers from the required journey’s end, i.e. Vembanad. By road route access to Vembanad is through most of the prominent towns and cities of Kerala. The government bus service is well managed while private taxis and cars are also available.