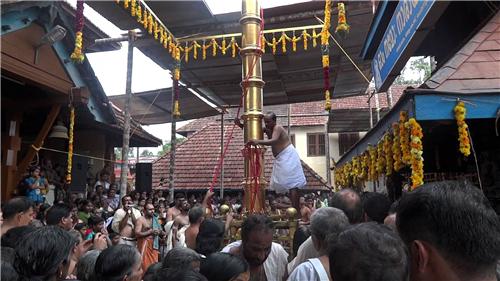 The Thiruvarppu Krishna Temple is located on the coastal line of the Meenachil River in the Thiruvarppu village, and hence the name given to the temple.

Varpu refers to the cast which is used by smiths to make bell metal vessels.

This is an ancient temple known to be 1500 years old. An inscription on the temple indicates that the temple was constructed in 850 AD.

The architectural style of the shrine resembles the typical architecture of the temples found in Kerala.

One of the most popular beliefs about the temple coming into existence is the recovery of the idol of Lord Krishna having four hands, which was placed in an Uruli, a flat vessel made out of bell metal.

This story revolves around the Mahabharata. It is said that when Pandavas had to live for 14 years in the forest, Lord Krishna gave them his idol for worship. When the Pandavas had completed their Vanvasa, the residents asked for the idol which was worshipped by the Cherthalai. After sometime, as circumstances could not permit them to worship the idol, they dropped the idol in the sea.

After a long time, when a holy saint was crossing the river, his boat stuck at one point and the sea dried at that place, and the idol of Lord Krishna was discovered. He took custody of the idol and traveled towards the present location of the temple. The sage landed at the shore and found one temple without any idol and established the idol there which is now known as the Thiruvarppu Temple.

Another story says that the Pandavas after completing their Vanvasa, had submitted the idol of Lord Krishna and their Akshaya Patra to the seawater. Sometime later, some fishermen discovered the idol without the vessel and established it in a temple. Soon, natural calamities attacked the place and the idol was washed away by the water, this time it fell into the vessel. The sage, referred above, while crossing the sea, discovered the idol. On reaching the shore, the vessel with the idol inside was temporarily placed in Valiya Madam. On that day, they had only mango pickles and coconut water to offer to the Lord. Later, the idol was shifted at the present place. During Arattu, the idol is taken to the Valiya Madam and the practice of offering mango pickles and coconut water is still carried out.

Also known as the Thiruvarppu Sree Krishna Swamy Temple, the idol of Lord Krishna established here has four hands, and the idol faces the west. The idol is correlated with Krishna after killing the Kamsa, very exhausted and hungry.

The Thiruvarppu temple is especially thronged by devotees on Sundays and Thursdays.

The Thiruvarppu Temple follows the tradition of other Hindu temples of Kerala and has its own unique set of rituals and festivals.

Unlike the other temples, the Thiruvarppu Temple is opened in the pre-dawn hours at 2 am and is closed at 1 pm.; is re-opened for devotees from 5 pm till 7.30 pm.

The priest of the temple possesses an axe along with the keys to the temple. The locales believe that God cannot tolerate hunger, so if there is any delay in opening the lock of the temple, the priest has the authority to break open the door with the axe.

There are five offerings made at the Thiruvarppu Temple.

Also, when all the other temples are closed during the eclipse time, the Thiruvarppu temple remains open.

Pithru Tharpana – a ritual to satisfy the dead ancestors, is usually not performed in other temples. But in this temple, the ritual is performed under the name of Pullattu Pooja, which has its own story.

This pooja is named after a gentleman from the Pullattu house. He did not have any children and thus decided to donate all his property to the Thiruvarppu temple, with a request to observe his death anniversary. On consent of the God, the gentleman entered the temple and surrendered all his assets to the Lord, sought his blessings from the Lord and died immediately. His death anniversary is observed as the Pullattu pooja.

The annual festival of the Thiruvarppu Temple is held in the initial ten days of the Medam, according to the Malyalam calendar, which is during the period of April-May. On the tenth day of the festival, an elephant race is held similar to the Guruvayur.

Pathaam Udayam – At the sunset on the tenth day, when the rays of the sun enter the shrine, is marked as the end of the festival.

Girl's lamp procession
During the ten-day festival, all the girl children who are below 10 years of age dress up as Lord Krishna and offer lamp to the Lord both during morning and in the evening. This ritual is known as Vilakkeduppu by the local crowd.

Other important festivals celebrated in the Thiruvarppu Temple are Thiruvonam and Ashtami Rohini.

The Thiruvarppu Temple of Lord Krishna is surrounded by temples on all the four sides by other temples.

Nearest Airport: Cochin International Airport which is about 90 km distant.

The Thiruvarppu village is in the developmental stage and hence no proper accommodation is available there. One can stay at various hotels found in the city of Kottayam.