Subramanyam, Murugan or Kartikeya are the names of the God of war in the Hindu Patheon. He is the son of Lord Shiva and his consort Parvati. He is known by several exotic names like Kumara, Saravanbhava and Velayudhan. Murugan is a most idolized deity among the south Indian states. 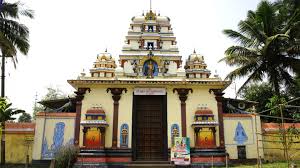 There are a number of Subramanyam temples in Kottayam there are eighteen Murugan temples which have prominence of place among the devotees. The names of these temples and their locations are given below with details of some of the prominent ones.

The Subramanyam Swami temple situated in village Kidangoor is an ancient historical temple which is a heritage worship place having a deep seated belief system and rituals. It has high divinity status in the eyes of all its devotees.

Kidangoor village is a small settlement tucked away into the hilly terrain of Kerala's Kottayam district. The Subramanya Swami temple is situated on the banks of the Meenachil River in Kidangoor and is primarily dedicated to Lord Vishnu but it also has several other deities ensconced within its sanctum sanctorum. The temple has a special and unique holy place because of its singular presence, processes and rituals. There are a number of practices that are adhered to till date adding to the uniqueness of the place. For example, there are certain areas of the temple that have restricted entry and women are not allowed there.

There are several legends and myths associated with the construction of this temple on the banks of the Meenachil River. Two of the prominent ones are both associated with the presence of Swami Subramanyam. The first legend has it that the great Maharishi Gauna was carrying a ‘Kamandula’ or receptacle made from a hollowed out gourd. When the Maharishi tilted the ‘Kamandula’ the idol of Subramanyam Swami flowed out with the water. This ‘Vigraha’ or idol was taken to Vishnu Kshetra located in the Kidangoor village.

Thus, at the temple, a sanctified platform had been prepared for the installation of an idol of Lord Vishnu. However, in its place the idol of Subramanyam Swami was installed and another platform was constructed for the installation or ‘pratishta’ of the Vishnu idol within the sanctum sanctorum or the ‘Sreekovil’. There is another story also which goes that when the ‘pratishta’ or installation was to be done the people actually saw Subramanyam Swami and since he was observed standing, the idol too is in a standing pose. This was probably because the Swami never got a chance to sit before he was seen by the priest.

There is a strong belief that the ‘Kuthambalam’ or inner most hall of the temple is unique because it is in beautifully sculpted with the ‘Natya shastra’ or classical dance poses all around. This makes it different from the ‘Kuthambalam’ of other temples. Within the ‘Kuthambalam’ is a stage or theatre which was called the ‘Rangamandapam’ having elaborately sculpted scenes from the Ramayana and the Mahabharata. In the centre of the ‘mandapam’ is a central pillar carved from the wood of the ‘kurumthotti’ which has been recognized as a popular medicinal plant of the region.

The ‘Thaipooyam’ festival is held in the month of ‘Makara’ or between January and February. One of the regularly held festivals of the temple is called the ‘Shastivrata’ or the fast and prayers offered and held on the sixth day after the new moon night or ‘Amawasya’. Other significant offerings of the temple are Utsavabali, Tulabharam, Kavadi, Chuttu, Vilakku, Udayasthamana pooja and Muzhukappa, Panchamrita abhishekam, Pantheerazhi, Kadumpayasam etc.

By road one can reach the temple after travelling seventeen kilometers from Kottayam over a well metaled road.

This temple is considered to be seen as the Palani temple of Tamil Nadu. As it is located near the Vaikom temple. Belief has it that no pilgrimage to the Vaikom temple is complete without paying ones respect at the Udayanapuram Temple. This would fulfill all wishes. However, if this was not done, the pilgrimage would be considered fertile. Another unique aspect of the temple is that the ‘Nalambalam’ is placed before a large pond. This is a rare placement for any temple. The ‘Vaikathashtami’ and the festival of ‘Kumaranellur Thvikkanthika’ are both very significant. The celebration of Ashtami is another significant aspect of the Udayanapuram temple.

The highlight of the festival is the grand procession that takes place on Ashtami. According to legend this procession commemorates the victorious triumph of Lord Muruga over the demon Soora Padmasura. His victory is applauded by mortals and gods alike.

This temple is situated at Changanacherry where the presiding deity is Lord Muruga. The unique significance of this temple is that by the order of the scion of the Travancore kingdom, the Chithira Thirumal Balarama Varma, this temple was open to the entire Hindu clans. There was no restriction of any sort. This fact was appreciated and publically landed by Mahatma Gandhi, the Father of the Nation as well. The presiding deity is in the form of the enraged Muruga whose weapon or ‘Vel’ is pointed downwards as if it had just been used. This was probably because he had killed the demon Tharakasuran. This feature is unique only of this temple. The other deities are Mahaganapathi, Ayyapan and Lord Krishna besides certain lesser deities. Tuesdays are significant pooja days when pooja is performed by specialist priest. December and January are the time of high festivals celebrations in this temple. Lord Muruga is also referred to as the king of the Perunna kingdom.

Subramanyam Temples of the area are several but a few prominent ones have been discussed here.