Vishnu, popularly known as Narayana is the second member of the Hindu Trinity and is believed to be the preserver of the Universe. In Hindu mythology, Lord Vishnu is shown in human form taking rest on thousand-headed serpent Anantha and with one of its legs on the lap of Goddess Lakshmi.

Lord Vishnu is always shown in dark blue or black colours with four arms holding a Lotus, Conch, Chakra and Mace. He possesses a sword Nadaka and bow called Sarnga, lives in Vaikuntha and His vehicle is Garuda. Chanting the thousand names of Lord Vishnu is considered holy. Here are the details of Mahavishnu Temples in Kottayam: 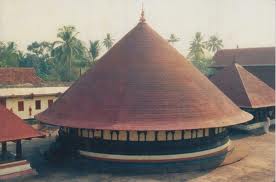 This most important ancient Mahavishnu Temple is near Changanasserry. It is one of the 108 Divya Desams in Kottayam district. This temple is of historical value as it finds reference in ‘Unnineeli Sandesam' which was written in 537. There is also an interesting story about the idol of Lord Mahavishnu, also referred to as Atbhuta Narayana. According to the legend when the Pandavaputra Yudhishtira left the throne he went with his brothers to the mountains of Kerala. They were so impressed by the greenery that they decided to settle there. All the five brothers decided that they will consecrate Lord Vishnu’s idols at different places of Kerala that they worshipped daily.

All the Pandavas except Sahadeva found the perfect Mahavishnu idol for their worship. When even after searching everywhere they could not find the perfect idol, Sahadeva decided to commit suicide by jumping into fire. When all the preparations were being done suddenly a beautiful idol of Lord Vishnu came out of the fire, thus, getting the name of Atbhuta Narayana. The idol of Mahavishnu in the temple has been placed and worshipped by Sahadeva and is fifth among the temples of Pandava brothers.

The main idol in Thrikkodithanam Vaishnava Maha Temple is of Lord Vishnu with conch, sudarsanachakram, club and lotus in its hands. The other idols in this temple are of Lord Shiva, Lord Ganapathy and Narasimhamoorthy. Daily five poojas called Ushapooja, Ethirthapooja, pantheeradi pooja, uchapooja, athazhapooja and performed. The main offerings to Lord Vishnu are palppayasam and kadalipazham. The offerings to Narasimhamoorthy are Kadumpayasam and Panakam.

Annual festival which is celebrated for ten days in the month of November/December is very unique. The most beautiful event of the festival is Deepam. The other important festival is Ashtami Rohini.

Managed by Sree Krishna Trust this temple is at the distance of just 10 kms. from Pala. Main idol in the temple is of Lord Mahavishnu. Idols of Bhumi Devi and Mahalakshmiare installed in this temple. The main offerings are Appamand Palppayasam.The most important days of worship are Ashtamirohini, Vishnu, Thiruvonam.

The temple is run by seven Namboothiriillams and is just 5 kms from Uzhavoor. This is an ancient temple built in twelfth century. Vilwamangalathu Swamiyar installed the idol of Mahavishnu here. Swami Vivekananda also prayed in this temple when he visited Kerala. The other idols in this temple are of Yakshi and Lord Ganapathy. In the month of November/December the annual Ekadasiutsavam of seven days is held. The main offering is Palppayasam. The most important days for pooja are Vinayaka Chathurthi, Karkkidakavavu, Navarathri and Ashtamirohini.

This is a small temple located on Midayikunnam hill near Vettikkattumukku in Kottayam. Constructed in thirteenth and fifteenth century, Velimamkovilillam manage this temple, which is famous for the mural paintings all over the world. These paintings depict Puranas, Hindu epics and playful behaviour of Lord Krishna. The sanctorum of this temple is one of the best in Kerala. The idol of this temple is very unique as it depicts Satyabhamaand Lord Vishnu mounted on their vehicle Garuda. The main festivals of this temple arePooyam (June-July), Thiruvonam (April-May) and Ashtamirohini. The main offerings in this temple are Palppayasam, Malarppara, Kadumpayasamand Ushappayasam.

This temple, renowned for Pithru Karmas, is situated at Pithrukunnamam junction. Narayananelloorillam manages this temple. Sahasranamarchana, Thila Homam and Vavoottu pujas are held in July/August for Pithru Karmas. The main utsavam of this temple is celebrated in August/September on the day of Ashtamirohini.