Rising from the dark ages of slavery in the seventeenth century Kottayam has had a checkered history of conquests annexations conquests and victories. The rulers of the Kkumkoor held away over the bounties of Kottayam upto the eighteenth century. 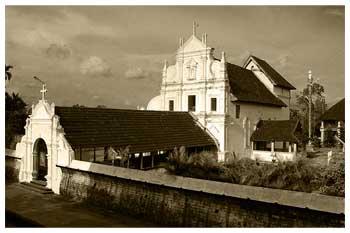 Later, however, the king of Travancore, Marthanda, Varma attached Kottayam along with other territories to his kingdom, Travancore in the middle of the eighteenth century. This status continued unabated upto the advent of the British who gradually took over the region of the entire country.

During the reign of the British, being strategically placed, Kottayam played a strong role in carrying out several protests movements which focused mostly on carrying out guerilla tactics so that the British could be routed out permanently. These protest movements were collectively called the Malayali Memorial Agitation. These agitations began in 1891 when the Travancore state sought representation in the Civil Services.

The thinkers of Kottayam were against the absolutely inform deal meted out to the poorer sections of society. The Vaikon Satyagraha was a massive non-cooperation movement that took place in 1924. It was targeted against the social misery of ‘untouchability’. It was one of the worst faces presented by an otherwise socio-culturally rich society. Recognizing the need to not only condemn but also eradicate it totally citizens of Kottayam launch a protest movement. Thus, kottayam was amongst the first to raise its voice to fight against this centuries old blemish on society. It was a massive movement. It was led by the charismatic and dynamic ‘Father of the Nation’, Mahatma Gandhi. This was to become a spearheading movement that protected the downtrodden sections against the constraints of the caste system as well as the restrictive bindings of privative customs and mind which was commonly prevalent in almost all parts of the country.

The fight for equality and protests against discrimination were the hall mark of all the Mapilla Kottayam agitations and protests. The famous 1930 movement called the Abstention Movement was held to protest the discriminatory attitude of the government nearer home. This protest movement was focused against the ban imposed on the entry of lower caste Hindus, Christian and Muslims in the Travancore legislature.

The citizens of Kottayam had exhibited advanced, learned and open-minded thinking and decision-making abilities for giving their consent to such broad-based agitations. They have been seen to give their collective voice to their opinion which has made for them a place in history.

Probably because of the trends of slavery witnessed in earlier times, Kottayam had always emerged vociferous against any community being discriminated against.

Kottayam has been the seat of literature and print media. Most of the reputed dailies in the Malayalam language oriented here and are continuing to be printed and published in Kottayam.

There have been several notable authorities and dignitaries who were born at or lived in Kottayam. The erstwhile President of India, Present Shri KR. Narayana was one among several others. Several cultural and cine artists also trace their origins from Kottayam.

It is no surprise then that the first Cooperative body of poets, novelists and writers called the Sahitya Pravarthaka Sahakarna Sangha was established in Kottayam.