Kottayam is one of the districts and upcoming cities located in the central part of Kerala. It is also the administrative capital for the district. It is surrounded by paddy fields of Kuttanad and Vembanad Lake on the west and the majestic Western Ghats on the east. The name Kottayam stems from Malayalam words “kotta” meaning fort and “akam” meaning inside – “interior of the fort”. 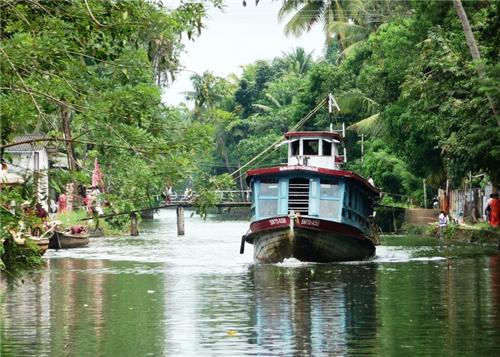 The original old town of Kottayam was founded on the hilltop now known as Kunnumpuram. This fortress was called Thaliyil Kotta and was founded by the local chieftain or RAJA known as the Thekkumcoor Raja who ruled from Thazhathangady till the mid-18th century.

Later the Maharaja (King) of Travancore – Marthanda Varma annexed Thekkumcore and surrounding areas of Kottayam to the Kingdom of Travancore. During the British rule of India, Kottayam continued to be ruled under the Princely State of Travancore.

Post Marthanda Varma's rule another ruler, Dharma Raja, also gave Kottayam a key position in the new defence strategy against Haider Ali and Tipu Sultan of Mysore. It also became a refuge for the princes who had to abandon their places in Malabar due to invasions from Mysore.

The epic struggle against untouchability - The Vaikom Satyagraha also took place here where the demand for the scheduled caste and tribes to be allowed entry into the temples and temple roads was demanded.

Role of Media in Kottayam

The city has been a major contributor to print media and literature. Infact Kottayam has played its own important role in the political agitations of its time. The “Malayali Memorial” agitation is said to have its origin in Kottayam which sought better representation for educated Travancoreans in Travancore Civil Services.

As with Kerala – the city boasts of 100% literacy in 1989 – to the extent that it is monikered "Akshara Nagari" which means the "city of letters" considering its contribution to print media and literature.

Kottayam prides itself with unique characteristics for which Kerala is known for - backwater stretches, lush paddy fields, hillocks, hills, highlands and extensive rubber plantations have given it its unique landscape.

Kottayam has a tropical climate like the rest of India with an oppressive heat during summers (March to May). It also gets plenty of rainfalls during monsoons (June to September) called the South-West monsoon due to low pressure over the Arabian Sea. The normal average annual rainfall is 3130.33 mm.
October – November is the post-monsoon retreating but is equally hot as in the summers as the day temperatures start increasing.

Kottayam is located in the south-central Kerala with Ernakulam district to the North, Idukki to the east and Alappuzha and Pathanamthitta districts to the South. The Western boundary is formed by th 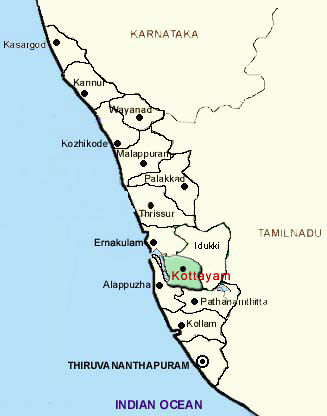 The traditional occupation of the town has been trading of spices and commercial crops such as rubber. Paddy is the mainstay for consumption and commercial use as well. Lakes such as Meenachil and Vembanad rivers are form part of the Kuttanad belt and the areas surrounding it lie below sea level. However, the paddy fields at Pallom, Ettumanoor, Kaduthuruthy, etc. fall under the area known as "upper" Kuttanad. It is the hub of India’s natural rubber growth and also home to Rubber Research Institute of India (RRII).

Coconut is another important crop being cultivated since long, however, it has been recording steady decline. Also pepper is an important cash crop in the region –it is an important export from here. Cocoa is another crop which is giving good returns now owing to the popularity of the crop and its products.

Kottayam is tourist-friendly as the use of English is wide-spread. Most signboards are also written in English along with the local language. Also Tamil is well understood in many areas. Kottayam is well connected by air by Cochin (93 km away) and Thiruvananthapuram (152 km away). Also a lot of national and international carriers bring passengers to these two main cities. It is easily possible to ply to Kottayam via buses, taxis abundantly available along with a few trains from Angamali (the closest to the airport) and from Ernakulam Junction or Ernakulam Town.

There are several bus services operating from Kochi, Thiruvananthapuram, Kozhikode, Chennai, Bangalore, Mangalore, Coimbatore to Kottayam. There are state as well as private transport buses available to suit different budgets and conveniences.

Another unique and interesting travel option is the backwaters by the frequent ferries (run by the Kerala State Water Transport Corporation) from Alappuzha (Alleppey) throughout the day.

It is the longest but the cheapest mode of transport taking two hours to reach Kottayam.

The general population comprising of various castes The Nair, Ezhavas and many other. The general population is generally not vegetarian. Rice and its various forms form the staple food. Kanji (rice gruel) with curries and pickles has been the mainstay of the food, along with dishes like Uppuma, Iddali, Dosai, Chappati and Poori. Read More

Kottayam is one of the 14 districts of Kerala spread over an area of 55.40 km2. It is located in South Central Kerala with a population of 357,533 (as per 2011 census). This is the seat of administration of the district with 26 talukas under it.